The new Liv Hail 1 is one of the more interesting new women’s bikes we’ve seen come to market in 2017. It’s a proper Enduro Bike for shredding with 160mm of travel and features a fully women’s specific frame. Designed to be right at home on technical and demanding terrain, the Liv Hail 1 has a serious rough and tumble specification.

It’s an absolute blast to ride especially on technical, natural, off-piste terrain where it really comes into its own. A long wheelbase helps keep it stable at speed and that reactive suspension system just eats up uneven ground whilst feeling lively so you can throw it around. It pops when launching off drops and the long wheelbase makes it land securely and confidently.

If you’re looking to get into enduro racing, love riding at bike parks, but don’t want a pure downhill bike then we think the Liv Hail 1 is aimed squarely at you. 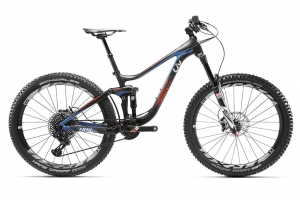 We love that it’s not just a rebranded ‘small Reign’ the Liv Hail 1 s a very different bike. In Liv’s opinion, there are significant enough physical differences to warrant a bespoke geometry for female specific riders. It takes data from a global body dimension database for its design, which is further refined through testing and feedback by sponsored athletes.

In the case of the Liv Hail 1, a 160mm travel, 27.5 wheel mountain bike aimed at enduro and aggressive trail riding, the equivalent men’s (or unisex) bike in brother brand Giant’s lineup would be the Giant Reign. This is also a 160mm, 27.5mm travel bike.

But there are significant geometry differences; the Hail has a slightly steeper head angle and seat angle, coming in at 66 degrees and 74 degrees for the Hail respectively, compared to 65 degrees and 73 degrees on the Reign. The reach is shorter and increases by smaller increments than the Reign, too. Wheelbase is also shorter but minimally, within the region of a few millimetres.

Comparing the Hail to what would probably be its closest competitor in terms of purpose, the Juliana Roubion with 150mm of travel, there are a lot similarities in terms of the geometry. Same head and seat tube angles (though the Hail has a longer reach), wheelbase, marginally longer chainstay length and a lower standover. In our opinion the Liv Hail is a better bike and is certainly better specced for the money.